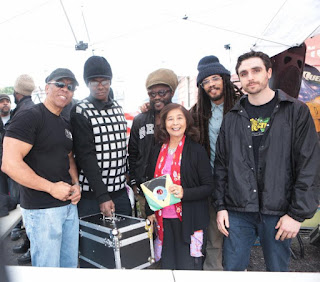 “Record Store Day is so important to us here at VP Records,” stated VP Records founder Patricia Chin, who happily made her way through the crowd to greet guests and take photos. “We’re grateful for everyone who came out to spend their Saturday with us and purchase the wonderful vinyl releases we have for sale.”

“We had such a great time last year,” said D.J. Roy of Road International “we had to come back and play more tunes for the people.” Record Store Day, originated in 2007 and has since grown to become a cultural phenomenon with record stores and music lovers hosting celebrations internationally. Now in its third year, the VP Records Sound System Showcase is designed to celebrate and preserve the classic sound of vinyl and Jamaican sound system culture, in an era where music is predominantly consumed through personal digital players.