Long time Public Relations Officer and Entertainment Manager in the Jamaican Dancehall world, Lesley Hayles (also known as “Lesley Odyssey” in music and social media circles), has added to her repertoire by embarking on a production journey.

The daughter of Stephen “Fada Bunny” Hayles, founder of Bass Odyssey sound system, was born into a musically-inclined family, inclusive of disc jockeys, singers and producers. Hence, it was inevitable that Lesley herself carry on in the family trade. However, being so shy she stayed in the shadows, behind-the-scenes and stuck with the business side of the music and entertainment industry...until now.

After working with many artistes through the course of over 15 years, the Kingston-based entertainment mogul was finally bitten by the producing bug when it was suggested by longtime friend, Anthony Haynes. He gave Lesley her first set of instrumentals in 2018, beats all created by him under his Haynes Records label. Her first production, “Ride Me Riddim”, is a rhythm compilation that features six of her artistes out of more than a dozen submissions. The remaining tracks will be on the second (and quite possibly a third) part of the release, at a later date yet to be decided.

Comprising of half established acts and half upcoming acts, Ride Me Riddim consists of tracks from marketing genius Ganggoolie, and Lesley’s oldest sister, Ava “Sandy Star” Hayles best known for her 90s hit “Don’t Wanna Lose Your Love (You Boy)” on the Taxi Riddim remake by their uncle, Dennis “Dennis Star” Hayles. The title track, “Ride Me” was written by Lesley herself and recorded by Philadelphia-based Dancehall/R&B singer, Mzs Quanny. Ride Me Riddim also features Lajik from New Jersey, Star Stain from Montego Bay and 1Leedah from Portmore, via May Pen.

All tracks were mixed and mastered by younger brother, Stephen “DJ Ali Patch” Hayles from Mixplosion Sound System, with artworks done by another younger brother from Coppershot Sound System, Shomani “DJ Kitt” Hayles for his NAAS Artworks graphics design company. Videos are expected to be done for most of the tracks and out on YouTube by the new year. Lesley’s nephew, Rashaad “Karrat” Hayles edited the official music video for his mother’s, Sandy Star, track called “Just One”, which she directed within the confines of her bedroom in New York. It was produced by his Karrat Gold Production (121 KGP) visuals company and posted on his YouTube channel officially on November 11th, 2020. The album was released on November 13th, 2020, Lesley’s 40th birthday, as a gift for the usually conservative woman and is being distributed by United Masters.

Lesley has worked with Munga Honorable, Gaza Sheba, Razor B, BridgeZ, Savage, and Nae Nae, among many others in the past and is currently working with Riigz, Khristopher, Bramma, Gage, Xyclone, Daro D’Dada, Ras Demo, Thurteen13, Prospec, Dappa Flex, Varian and everyone on her productions. 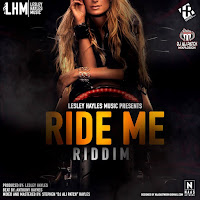 Lesley was featured in the Jamaica Gleaner on November 27, 2020, which can still be read here: jamaica-gleaner.com and she can be contacted via social media by clicking her artist page here: untd.io