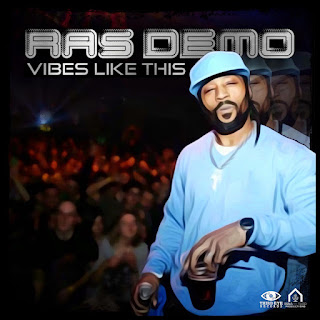 Ras Demo, the Demolition Man, is a UK-based Dancehall Reggae Artist, “here to demolish evil things” with his music, one track at a time. “Vibes Like This” is one such track, the latest in his artillery of lyrical weapons against the evils in this world.

Produced by his label, Inna Mi Yard Productions, in coalition with his management label, Third Eye Records, it was recorded in his London studio and released on April 10, 2020. In the midst of the Corona Virus pandemic, Ras Demo reminisced of his time in The Gambia in December 2016. The vibes was different and could not be compared to any other experience. Ras Demo then configured his thoughts of his trip, put pen to paper and produced “Vibes Like This” upon his return to England.

Infusing Dancehall with Afro beats, Ras Demo expresses in detail his need for the beats, the events he attended and the women he met while in the motherland, and needing to share all of that with the world. The track is a dancing song which also incorporated African voices in the background, giving “Vibes Like This” another vibe!

Available on all digital media outlets, “Vibes Like This” is being distributed worldwide by VPAL Music and can be downloaded or streamed everywhere. An animated video for the track is in the making and will be released in May but in the meantime, the YouTube official audio visual is uploaded to his YouTube channel and on all his social media pages.

Ras Demo encourages his listeners to stay safe by staying home in these times and listen to “Vibes Like This” to keep levelheaded during the pandemic. Please support great music and purchase Ras Demo’s “Vibes Like This” here:

Professional DJs and radio stations may contact Ras Demo’s Public Relations Officer, Lesley Hayles, on WhatsApp at 1-876-414-2660 or email her at lesleyodyssey@outlook.com for the promotional download of “Vibes Like This” as well as for interviews and other features.