The pair teams up for a killer collaboration! 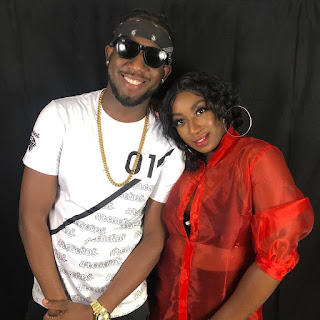 The very sultry Mzs Quanny shows off her unusually raunchy side with the remix of her 2017 hit track, “Bruk It Off”. The remix features a verse from the Billboard recording artiste, Xyclone, and the track is doing very well so far, even after only 2 weeks since its initial release mid August.

The original “Bruk It Off” track was released on December 27th, 2016 by producer Damion Dainja on the rhythm compilation, Deep Meds Riddim. The song had a nice run in early 2017, receiving radio play in Philadelphia and on online radio stations but Mzs Quanny had hoped for a bigger buzz and Xyclone saw it going way beyond that with the right promotion.

Mzs Quanny was born in Philadelphia, Pennsylvania to Caribbean parents. Her mother is from St Kitts, while her father is from Jamaica. Xyclone was born and raised in Waterford community of Portmore, St Catherine in Jamaica before migrating to the United States. The Baltimore based artiste has been successful with all 4 albums, always charting in the top 5 on the Billboard Reggae charts each time. Mzs Quanny and Xyclone have known each other for years when she worked with his father, the legendary sound system operator and party promoter out of Philadelphia, Peter Blacks. The pair had previously worked together on Xyclone’s 2018 album, 2774 Waterford Parkway, on a song called “Still I Rise”. It was Xyclone who suggested that they do another project together by reviving the original “Bruk It Off” track and give it the proper exposure it deserves.

“Xyclone killed his feature!” expressed an elated Mzs Quanny in an August 26th interview on YungnFresh Radio. “He sent me his verse, I fell in love with it and we got straight to work.” The lyrics are an expression of letting yourself go and not be shy in bedroom encounters. It’s a track best suited for the females to dance to and for the men to watch, or join in if they so desire. “Mzs Quanny always aim to please,” she says to her male listeners.

“Bruk It Off Remix” was released on August 13th, 2020 and has received love from everywhere. A vibrant video to accompany the energy of the song was out on YouTube on September 4th, 2020. With over 9,000 views on YouTube already and 10,700 streams on Spotify, Mzs Quanny appreciates the buzz the remix has been getting in such a short time span. 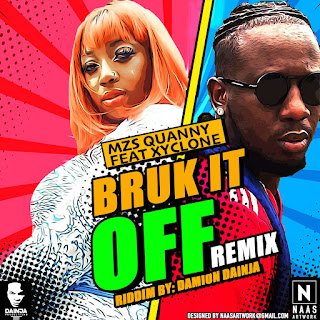 After building a strong team behind her, taking the proper promotional channels and putting enough pressure in the right places, Mzs Quanny sees nothing but success for herself and this track as listeners get familiar with her sound. Mzs Quanny is also looking forward to the completion of her album, “Don’t Mean To Brag”, set for release by late October 2020.

For bookings and all things Mzs Quanny, please contact Lesley Hayles locally at lesleyodyssey@outlook.com or at 1-876-414-2660 via WhatsApp.

Support the artists by clicking the purchasing and streaming links below:
iTunes: https://music.apple.com/us/album/bruk-it-off-remix-single/1527763603
Spotify: https://open.spotify.com/album/3KppQRE7xQzWndQyY9LRaI