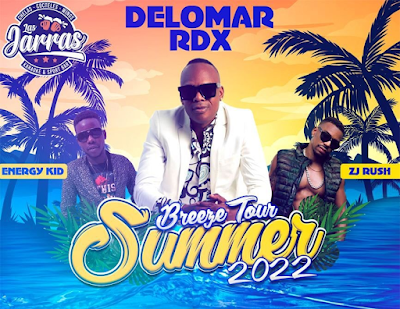 Half of RDX duo, Delomar, has embarked on a solo tour of the South American country of Nicaragua. Called the Delomar Breeze Tour Summer 2022, the tour includes 6 shows in 6 different cities over the span of 15 days.

Delomar and his team, which consists of his DJ, Y Rush, and his dancer, Energy Kidd, whom he did the track “Breeze” with, arrived in Nicaragua on April 6 with the first show on the 9th in the city of Bluefields. Other stops include cities Bilwi, Managua, Jiquilillo, San Juan del Sur and Leon. Top local acts Lirico, Mr Saik and Comando AB also performed. Upon arrival in the capital city of Managua, Delomar made appearances on several of the country’s mainstream TV stations, like Channel 2, Channel 4 and Channel 8, to talk about the tour and presented a preview of what patrons could expect to see performed on each show.

The response has been overwhelming as the tour has provided nonstop fun, partying, drinking and, of course, lots of dancing and music. Delomar and crew delivered the patrons’ favorite RDX songs alongside the latest from Delomar himself that’s already popular and making an impact in Nicaragua.

Fans in Nicaragua are loving his latest tracks, namely “Breeze”, “Dancers Unity” and the ladies favorite, “Twerk”. Those 3 have been receiving the most airplay on several radio stations throughout the country with older songs by RDX like “Shake Your Bam Bam” officially being the number one song in Nicaragua as it can heard in buses, taxis and other vehicles while in traffic. Little shop stalls are also blazing the track and it has all been surprising to Delomar but he appreciates the love and support from his Nicaraguan fans.

As Delomar wraps up this tour, his management company, Reckit Ralf Music, is already working tirelessly to make a huge break using the Delomar brand in hopes of returning to Nicaragua in the summer with a bigger team and to cover the entire Latin market as well. As a starting point towards this goal, they have gone on to shoot the music video while on tour for his latest track, “Siddung”, that involves several Nicaraguan talents.

On his return to Jamaica, Delomar is looking forward to performing at a few local shows, as well as other overseas events, namely in Belize this July and a US college tour in September. Delomar is also keeping busy in the studio, working on new music.

Fans of Delomar can keep abreast of all the happenings in Nicaragua by checking out his Instagram page @delomar_dweetdon, which also includes behind-the-scenes highlights of his “Siddung” music video shoot and search “delomar_dweetdon” on TikTok or click https://vm.tiktok.com/ZMLbLg36V/ to go straight to it.